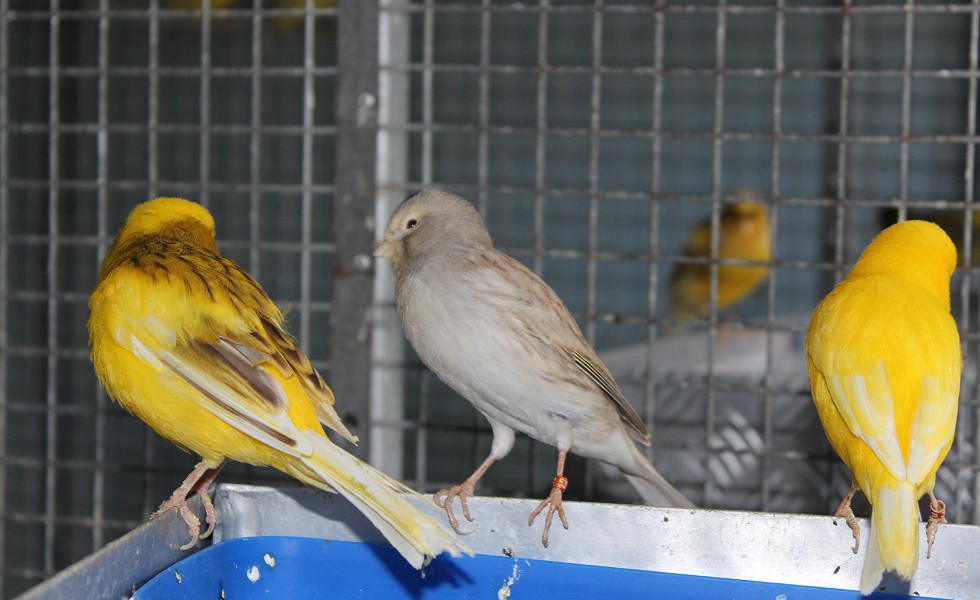 When I say Breeding early, I mean having chicks hatched by the end of July or early August. So far I have found early August to be the most successful. By then the day temperature is getting up to 14-16C and quite sunny.

For a canary hen to breed successfully, she requires a minimum of 13 hours of light daily, warmth, and the correct high protein diet. When I say breeding successfully, I mean that, not only does she lay a full clutch of fertile eggs, she also rears the chicks with a minimum of trouble. Now for that same hen to produce chicks 3 to 10 weeks earlier than normal, you the breeder must provide an artificial Spring and the correct diet and I do this over an 8 week period. I allow 8 weeks as this enough time to bring the birds into breeding condition gradually. If you try to bring your birds into condition in a shorter period your breeding season is very likely to end up in disaster with problems such as soft moulting, infertile eggs, hens leaving the nest and this sort of thing.

There a quite a few does and donts, but before I get into the nitty- gritty of light, diet, heat, etc, and at the risk of boring you or telling you what you already know, I feel it is important to make certain points quite clear. This is the way I successfully breed my canaries early. Everyone has their own method of breeding and I am not suggesting you follow mine, but I am merely outlining the method I use. I do not wish to be the cause of any breeder having a bad breeding season.

Ideally, young stock birds should be approximately 12 months old before breeding commences. Therefore it is pointless taking a December or January hatched hen and think you can use that bird in an early breeding program, because this is not so. The young hen would most likely end up egg-bound or have something equally disastrous happen to her before the breeding season was completed. Another important point to keep in mind should you start the breeding season early is to finish the season early. Do not try and put your hens through four nests. I know from experience that it will ruin them. The ones that dont die in the following moult will fail to come into breeding condition the following year. The next thing to consider is the Birdroom. I have mine fully wired electrically, with both fluorescent and globe lighting plus power points. Also I have removed 4 sheets of roofing iron and replaced them with clear plastic sheets which gives a good even spread of light throughout the day, even on overcast days.
My conditioning goes like this :-

Mid-May  The fluorescent lights come on at 7am and go off at three hours later; for the next 6 weeks the light timer is advanced by 15 minutes each week so by the end of June lights come on at 5.30 am. During those 6 weeks the birds have been kept in flights and allowed to go to roost each day with the normal sunset.

1st July approx  with the lights coming on at 5.30am the breeding stock are taken from the flights and placed in triple breeders. As each bird is taken from the flights their condition is checked. The feathers are then cut away from around the vent and the toe nails are trimmed. It is still 2 weeks before pairing up and this is enough time to allow the birds to get over the ordeal of all this. Hens can be housed 6 to a triple breeder, but cocks I have found 4 to a triple breeder to be enough.. For the next 2 weeks I continue to advance the light time by 15 minutes each week, but now I also give the birds some light in the afternoon. Just as the light is beginning to fade at approx 4pm, I switch the fluorescent on for the first week. I then switch the lights off in time to let the birds roost
with the natural end of day. Then on the second week the lights go of at 6pm. This brings us to mid-July and the birds have 13 hours of light each day.

Mid – May  The birds are given soft food and sprouted seed alternately every second day, i.e. soft food Monday, sprouted seed Wednesday, soft food Friday and sprouted seed Sunday and so on.
The birds do not require a great deal of each, just enough to start bringing their condition forward. To the soft food I add wheat germ oil at the rate of 25 drops to every 20 pair of birds. Why wheat germ oil? Well, its very high in vitamin E, the reproductive vitamin. The whole idea of this program is to stimulate the birds both in body and mind. The light takes care of the mind and the vitamin E looks after the body, and of course a small amount of oil helps prevent egg binding. Wheat Germ Oil is 10,000 times stronger than fresh crushed hemp seed, which when it was available was considered the best conditioning seed to feed birds.

The soft food and sprouted seed is slowly increased in frequency, so that when the birds are taken from the flight cages they are getting a small amount of each daily. I continue to feed at this rate until the birds have chicks. Then increase the amount of food according to number and size of chicks. One important thing to remember is to stop feeding the wheat germ oil before the chicks hatch. During the 7th and 8th week, when the birds are housed in groups of 4 and 6 in the breeding cages, I like to give them a tuft of brown grass, dirt and all, about the size of a clenched fist to each group. This I do every second day or so. The birds will eat most of the dirt and grit and the grass they dont eat gives the hens something to carry around in their beaks.

Mid July  By now the hens should be putting bits of grass behind the drinking bottles and in the grit trays. The cocks should be in full song and, as they say, tearing off the cage fronts to get at the hens. Provided things have gone as planned, it is now time to start pairing up. I have not got any fancy way of doing this. I just apply close attention to breeding records and blood lines and put best to best straight into the breeding cage. The following day the nest and nesting material goes in and generally there is very little fighting. Usually within 3 to 4 days the first eggs are laid. Now, and only now I start using heat. I have a thermostatically controlled heater (12 to 14 C ) plugged into the light timer. This is so that when the lights switch on at 5am the heater can come on and heat the breeding room before the hens lay their eggs. The heat helps to minimize the chance of egg binding on chilly mornings and later when the chicks hatch the hens are more inclined to get off and start feeding soon after the lights come on if the chill is off the air.

Foot note. John Arthur is a most respected exhibitor and Judge of Red Lipo-chrome and New Colour canaries in Australia.

To promote and encourage the hobby of caring for, breeding and showing of the various types of canaries.